Full Name
Karyne Jones
Title
President and CEO, National Caucus and Center on Black Aging
Speaker Bio
Karyne Jones is the President and Chief Executive Officer of the National Caucus and Center on Black Aging, Inc. (NCBA) based in Washington, DC. NCBA is the largest minority focused aging organization recognized as the leader in senior housing, employment, health and advocacy on behalf of minority seniors.

Prior to becoming NCBA’s CEO, Karyne was Executive Director of Federal Relations for SBC Comminutions (now ATT). She was elected and served eight years as State Representative in the Texas Legislature representing San Antonio and prior to that, was an elected Board member of the East Central Independent School District.

Karyne currently serves on the national boards of directors for Alzheimer’s Association, Generations United, Center for Innovation, Leading Age and Immediate Past Chair of the Board for the American Society on Aging. She is also an Adjunct Professor at Stetson University School of Law, Gulfport, Florida.
Speaking At
“The Future of Brain Health: Promising Advances in Medicine and Technology”  Innovations in science, changes in policy, and how you can make a difference. 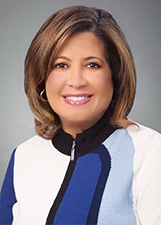